Neighbourhood kids play with kites The kid brigade found a craze in the flying sport when they were gifted few units of kites by Rajesh. They engaged in fixing tails and ear tails when 'Rajesh uncle' told them that gives stability. The kites are typically in a fighter kite model and kids were not aware of such dynamics. They ran in the avenue to fly kites. There is no ground or a play ground for them in the vicinity of the resident colony. What surprises, the flying continued for next 3 days. They completely forgotten using mobile phones / games. That's a good sign. Some time mobiles are a bane than a boon..what it restricts and obstruct the power of imagination for growing children. Rajesh says it gives really a good feeling and things turned out to be very positive by the end of the day, Prithvi, young amongst  the kutty gang tied his kite in the back of his cycle and ride his kite and that went up while his brother kept flying his kite soaring the sky by running wit
Post a Comment
Read more

Kite Making at Sattva and Kite Flying at Kuzhuppilly Beach on April 30th, 2022 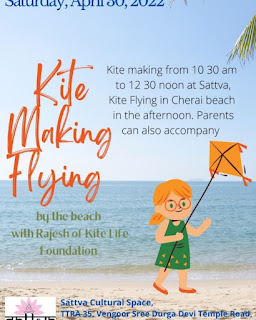 Participants enjoyed a kite building session at Sattva, a cultural centre owned by Supriya Mithra, on April 30th,2022. Making kites was an important element of their summer camp. Children have been participating for many years, and newcomers to the camp appear to be quite enthusiastic about the activities, Sattva organises. According to the KiteLife Foundation, this is the fifth time their association with Sattva. During pandemic too there was an online session. This time, because it's offline, a group of kids is working on a diamond kite and also in addition flying a para sled that can be used to fly on the beach. We chose Kuzhuppilly Beach as usual, and everyone had a great time flying their kites, made. A single line bridle was used on their kite that they created during the session. Few pics speak. Lol ❤😍 The beach wind is found to be a little strong, so the sled kite, their second kite in the session in which the kids were instructed to fly was a little difficult task. The ki
Post a Comment
Read more

i Sea Beach Pondy Festival, April 2020 Theyyam - Wind inflatable kite. Jelly kite ( inflatable laundry with Delta ( stick / carbon rod) Shiva Theyyam flies above light house Monster pointer, flat/ bow type with sticks/ carbon rods. Theyyam with box kite, a stick based  The big bubble flow show was a part of the event at Pondy Marina. The Kite Flying Festival is a spectacular sight in the blue skyline that has become a charm for both tourists and locals alike. It is a two-day event held at the beach festival in Pondicherry. It was also a reminder to many when did they fly their first kite or a kite that one can remember flying a kite as a child. Everyone, regardless of age, came together to see a lovely kite fly. A group of medical students flew the kite with their mates. Some of them admitted to never having flown a kite as a child. Others took turns celebrating by passing over what they had flown to their spectator buddies. Meanwhile, a member of the Puducherry Legislative Assembly
Post a Comment
Read more
More posts

The KITIST
Kochi, Kerala, India
Rajesh Nair, a strategic and principal consultant on Corporate Social Responsibility & Sustainability for companies. Rajesh Nair, a passionate creative kite builder and an internationally acclaimed kite flyer and popular kite festival organizer based out of Kochi, India has to his credit conducting more than 30 big and medium kite festivals. Besides Rajesh has conducted close to 650 kite making workshop, a session which is very unique activity, a much saught after by kids and adults alike to inculcate new dimension in kite making followed by guving the healthy benefits that one can earn in the life other than its sporting culture and impact. These workshops have been conducted in India and around the world. Rajesh is awarded by many prizes and accolades for his kites that promotes heritage of India. Rajesh can be contacted on 8848073153, 9895455115 or thru email kitelifefoundation@gmail.com